Grace is the unmerited favor of God.

Grace is the foundation of the Christian faith. Without it, we are lost.

In my 51 years, I have found it is also a necessity in living a happy life, a fulfilled life. Unfortunately, it is not until recently that I realized how very important it is in moving away from the past. And that I was not applying it rightly.

There were things that happened in my young adult years that embittered me toward Christians and toward precious friends. I withheld my love and my forgiveness as a protection against a hurt that I could not seem to overcome. I have many times sought to exorcise these nasty hurts by writing about them, but what I ended up doing is perpetuating a hurt and thus extricating myself from these people I loved so dearly. I turned my back on a congregation and a denomination considering it baggage left well behind. But it follows me still. The blessing is that God has given me a better understanding of grace and how it plays a role in my life beyond God's underlying gift that allows me to have fellowship with Him. It is also His way of allowing me to have fellowship with other believers. And though I am sure I knew this in some manner- I did not realize I was not practicing it in my own faith. I never once applied it to the series of events that left me so wounded.

The fact is, I have always held myself as a victim of the selfishness and lack of love of these friends. Did they know they hurt me? The answer to that is yes and no. I think I made it clear I felt abandoned and unloved by their behavior toward me, but I do not think I let them know how broken I was, because of my own pride. This led to a hardening of myself toward them that caused a callous to form and resentment to build and a painful, unhealed wound underneath that managed to fester and return time and again. I would bandage it up with a false sense of piety that I was right and they were wrong, when all along, I was just as wrong. But I considered all those that so easily moved on past my own misery as disposable. What's more, this sense of being wronged has followed me into my middle age (I hate using "middle aged" - but for lack of better right now - I use it) friendships.

The fact is - I am immature. Still. But I have matured enough to understand that I was very much a part of their behavior toward me. There were things I did that led to their actions and instead of recognizing that and admitting it at the time, in my sinful pride, I heaped the blame on them and benefitted not one bit, but wallered (that's wallowed y'all) in my own misery. For YEARS.

So sad. Such a waste of energy and time. And I pushed away new friends in fear of the same thing happening. Not realizing that it was something I actually did have control of. Go figure. And me such a control freak.

So - this week I reached out to a beloved friend and found the same kindred spirit there. And she was in need. I had the privilege of praying for her and it has filled my heart and spilled over. Miraculously I have love and the desire to place myself (proverbally - please don't make me do it literally Lord) at the feet of these old friends.

If grace - unmerited favor -  is truly a gift, one we have received from God, then it is one we can and should extend - for our own fulfillment.


Posted by Paige at 12:45 PM No comments: Links to this post 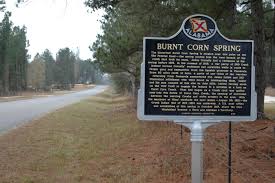 We pass by these two places every time we go to the beach or down to Mobile. There is an oral tradition that says that it may be named that because of the Creek Indians that left dried corn when they traveled through - or that it was named from the Creek War during the 1800's. And that same oral tradition state that Murder Creek was named that because of the dead bodies of the Creek Indians that were thrown into it.
The Battle of Burnt Corn happened later during the early 1800's and was what I always thought that area was named after, but it actually happened further south in Escambia County.
Love to find out those backstories!